For the PNW Pathfinders, yesterday started as the Silver Pathfinder Emporium & developed into a full on SwinGateFest 2019. Thanks to @02_Pathy &[mention=39745]stpickens[/mention] and his Dad f 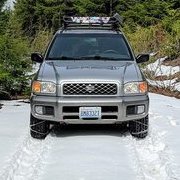 Another mission success! I got this on a little bit ago, but haven't had a chance to post pics. You can find way more pics/info in my build thread here.

Adding @Astrorami's build link to the thread, since we completed his last weekend.  His is the newer style aluminum carrier, which weighed around 36.5 lbs vs. the 58-lb steel carrier.  For his,